It has begun & Foto Friday

My summer that is.  Yesterday I officially said my goodbye’s at the theatre (just for the summer that is), packed up my junk and this morning I made my trek over to the east coast.  Pretty normal travel day all things considered, 6AM wake-up, have Sunreon pound on my door at 6:20, load up my junk into her car and head over to The Red Moose for a cup of coffee and a breakfast burrito.  I can’t remember if I ever mentioned this little coffee shop before, they haven’t been around that long (I believe since December) but they have great coffee and great food.  They are also practically right across the street from my house which could be a dangerous thing.

The traveling today was pretty painless.  I still think that it is a pain in the ass to get from the door of the airport to the door of the plane, but when you fly early enough in the day getting through security is pretty efficient.  In general, flying on Southwest is pretty efficient.  They seem to really be able to get you from one place to the next without much hoopla.  They also have pretty good fares.  I do love sitting in the terminal and on the plane during boarding listening to the agents and flight attendants try to explain to people about the open seating.  There are some people who really just don’t get it.  It isn’t that hard to understand is it?

As we loaded up the first plane (SLC to MDW) I ended up sitting next to a very interesting gentleman who works for the VA hospital right across the street from the theatre.  We shall call him D for the sake of privacy.  It turned out that he was also flying from SLC to MHT, though his reasons for the trip were not quite as upbeat as mine.  He was a very nice man and we had a great conversation for most of the flight.  In fact, by the time that we stopped chatting I only was able to make it about halfway through the new “Alice in Wonderland” movie.  In the end I suppose that isn’t terrible because now I can watch it on a screen larger than my iPhone.  I never did see it in theaters, and I was totally OK with that.

We arrived at MDW a couple minutes early which is a good thing because the layover was only 35 minutes.  I probably should and cold have grabbed some food, but since people were already lining up to board, I figured that I would hit the head and then get in line.  I ended up sitting with the D again and another interesting person who I believe was around my age.  This flight, which was only around 1:30-sin in length, the tree of us chatted the entire time.  I don’t think that I have ever had that much interaction with the people that I have been sitting with (who are not friends or family) on an airplane before.  In the end, D and I exchanged cards, and will probably connect again when I get back to Utah.  He has kids who he would love to see get involved in the arts, and he knows some people at one of the youth theatre organizations that he wanted to put me in touch with.

With an on-time arrival in Manchester I met my parents and I finally got to meet the new puppies.  They are sooo cute!  They are crazy hyper, like all huskies, but they are a lot of fun.  However they did manage to pinch my old Red Sox cap from my bag and chew it up.  It is a little sad, but I am sure that I will get over it (and get a new cap).  So, since it is Friday, I think that I will leave you with one of my father’s photos of the puppies.  The white one is Ava, and the black/silver one is Zoe. 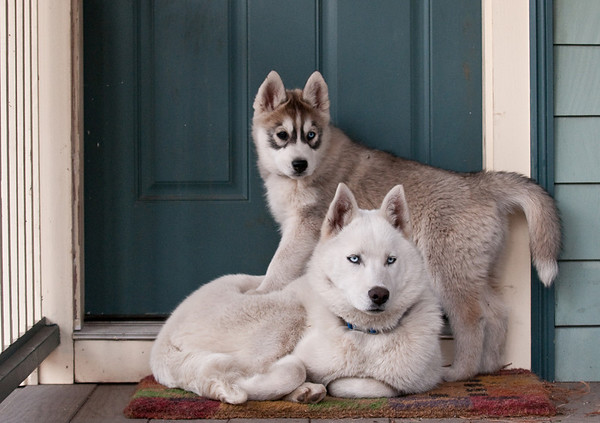 Zoe and Ava on the back porch

I suppose that I should also mention that for the rest of the summer (until mid August) I will be on the east coast, primarily in Maine and New Hampshire working at Indian and Forest Acres camps.  My blogging may be a little more erratic over the summer, but I will keep you all up to date!